by WebMaster
Comments are off

A large crowd headed to Close Street for this eagerly awaited first derby game of the season. Brook though got away to disastrous start as Thatto Heath racked up a 16-0 lead in opening 15 minutes.
Six minutes in Prop Jack Langton burst through a gap to score the opener with Shaun Quinn adding the extras. Three minutes later the hosts were over again creating an overlap for Winger Mathew Elwell to score an unconverted try. Within minutes Thatto Heath produced a carbon copy try with Elwell scoring again in the corner with Quinn adding a touch line conversion.
Brooks young side could have folded at this point as Thatto looked to a cricket score, however they dug in with Jack Wilson Cammy Tunstall and Reece Jackson working hard in defence, Their attack improved also with the introduction of Tom Johnston he and Phil Swift were taking the game to the home side.
Despite their efforts it was Thatto who increased the lead on the half hour mark when their Man of the Match Jack Langton burst through again, his charge was halted by Jordan Darwin however he handed the ball on to Alex Bridge who scored beneath the post with Quinn again converting.
With half time approaching Brook forced a repeat set of possession and Iwan Marsh spotted a hole in the hosts defence to reach out and score with Jordan Darwin converting.
Brook buoyed by the score came out for the second half believing they could get back into the game scheming half backs Jordy Welsby and Mike Wynn were taking the game to the home side. Thatto managed to hold Brook until Fifteen minutes into the half when good handling sent Jordan McManus clear his clever chip inside was collected by Mike Wynn who scored with Jordan Darwin converting leaving just a ten-point margin between the two sides.
It was game on however the home sides resolute defence kept Brook out until two minutes from time when Brooks Jack Wilson who was brilliant throughout came on an unstoppable charge and scored. A quickly taken conversion sailed just wide however there was time remaining for one set and Brook fancied the draw.
Unfortunately, as Brook threw the ball around hoping to make the break a loose pass was collect by Heaths Brandon Neill who scored in the corner to wrap up what turned out to be a great game.
Jack Wilson deservedly picked up both The Heatrek Man of the Match and the players Tisdalls accolade ahead of Jordy Welsby. 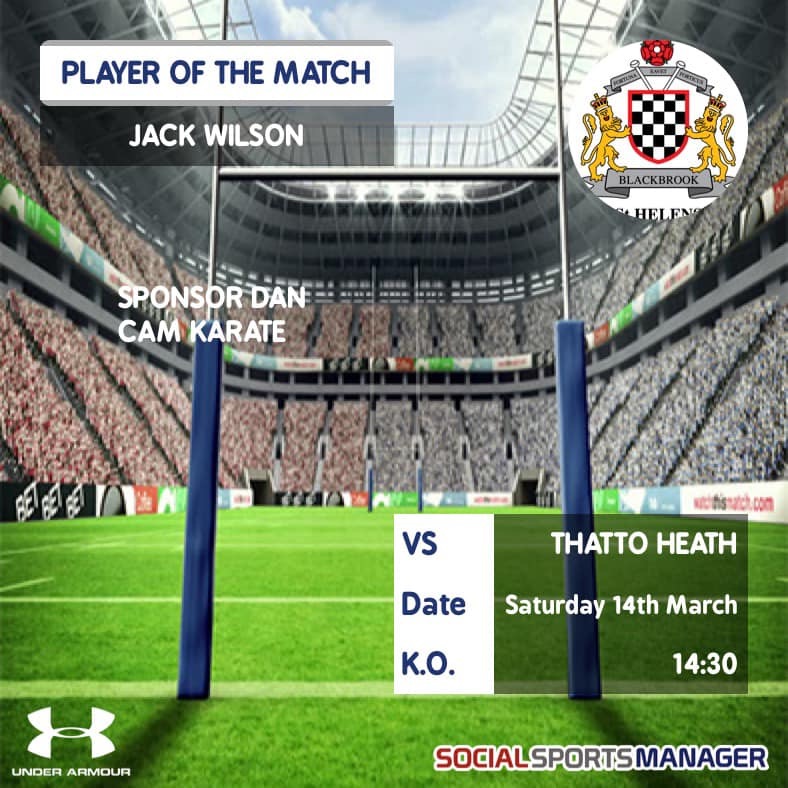